In reference to dossiers :
n° 27170 (Gaston Nogier)
n° 27171 (Marcel Roux) Paris, March 4th 2008
Nicole Richeman
French Committee for Yad Vashem
Department of the Righteous
20 Quai des Célestins
75004 Paris
Dear Madam, My nephew Marc Draer has passed on to me your request for further testimony relating to his application to have the above-named persons officially recognized among the “Justes parmi les nations”. My 89 year old brother, Marcel Drajer, who resides in Australia, and myself are the sole survivors of our family to have lived through those difficult years. Marcel’s state of health, added to his remoteness, no longer allows him to testify. I was already in contact with the Comité Français pour Yad Vashem to have included on the Wall of Names the names of those members of our family deported never to return, (See the Memorial edited by my nephew in 1982, of which you have a copy) and the name of one who was to become my husband in 1950, namely Dorin Glucklich, subsequently known by his Resistance name of Pierre Vincent, one of the few to escape from the convoys that left from Drancy (convoy n° 46 of February 9th 1943). When my nephew conveyed to me his plans for the village of Saint-Mélany, I resumed contact with you, and you had the great kindness to send me the file on the Département des Justes, which I sent on to him. I thus got to know of his work, of his research carried out over several months, and of his plan to turn to account the writings of his father (my brother) Hermann Joseph Draer. I also learnt of his numerous trips to the Ardèche and the Drôme for the purpose of making contact with the survivors of those times (or their descendants) and of obtaining from the Mayor of Saint-Mélany the municipality’s endorsement both of the steps he was taking and of the funerary plaque he planned for the village cemetery, and so on. Last April when I was staying at his place in the Languedoc we journeyed to the village of Saint-Mélany. I need hardly tell you of the fillings I had on retracing my steps, almost sixty-five years after the events which had led my family and me to this village of Saint-Mélany, or on rediscovering the very classroom as I has known it (I was eleven year old in 1943), the house know restored and inhabited, which the village had put at our disposal during our over two-year sojourn there, or again my emotion as I gazed at the stele containing my brother’s ashes. ... From my earliest childhood in Paris, I was almost always fostered and boarded out with occasional trips back home. Of these, I recall above all my father who was hard-working, my mother who was often sick, a few family gatherings with the Krauts (my mother’s family), my cousin Wolfgang whom I adored, and the Jakubowicz family (see the list of the memorial cited above and edited by my nephew). On the declaration of war, I was at home: school Pont-aux-Biches (in the Arts-et-Métiers quarter). Departure from Paris to Toulouse was on foot, by cattle train, or sometimes in military lorries, when they would let us on (they too were on the run). We would overnight in churches or at times (but only rarely) in private homes, often in barns or cemeteries (a lot quieter!). There were also the Italian Chasseurs (light infantrymen): I remember my father lying over me to protect me from their hail of bullets. My mother, my sister Françoise and I made our way back towards Paris – women were still allowed through the line of demarcation – to expedite some matters in the free zone. Françoise, the courageous one among us, made several return trips until it became too difficult. My mother and I were then stuck in Paris with “Jew” stamped on our identity cards by the police station in the rue de Bretagne. Mother and I attempted to cross the demarcation line just as we were. There was a German inspection in the train. The other women got through all right, but mother’s card had the stamp “Jew”… we were both made to get off and had to wait all alone in an office… some hours later we were put back on a train… headed for Paris! Within a couple of days we were off to Drancy or Pithiviers. Luckily, orders had not yet arrived. A chance like that doesn’t happen twice… My father sent Françoise back once again with an escape agent who was to get us across the demarcation line by night in the countryside. The operation was a success as I am here to testify; but numerous films recall these clandestine crossings and remind us how difficult and risky the task was. 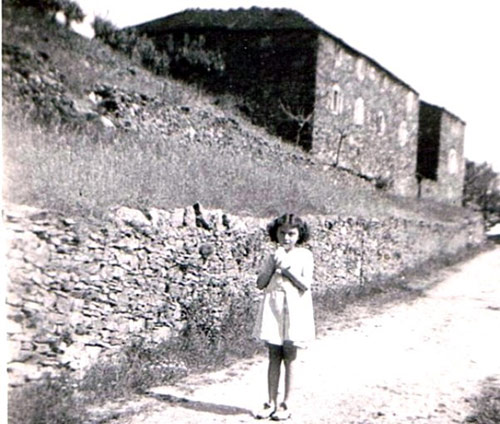 in April 2007, before the stele containing my brother’s ashes

The rest of the story has been related better than I could do in writings which my brother Hermann left in the seventies. You have a copy of them amply illustrated with numerous photographic documents and facsimiles which my nephew has successfully compiled. There we find recounted in meticulous detail the saga of those days when our parents, my brothers, my sister and myself were continually on the move from Toulouse to Portes-lès-Valence, and finally to the Ardèche, where we all found refuge and protection up to the moment of Liberation. The only thing that my brother couldn’t know and that nobody has ever known is how much I suffered among the Sisters at the orphanage Saint-Jeanne-d’Arc-de-Pamiers (Ariège), where my parents had hidden me. But it is nothing compared with the sufferings of those of our people who were caught. This is why I have never spoken of it. At the orphanage the daily routine of the Sisters was more in line with that of the Foreign Legion than a girls’ college, at least it was so at that time. What’s more my little school mates having realized that I was not a “real” orphan – since my father or someone else came to see me from time to time – took it into their heads to make me pay for it by making me the butt of their activities. It’s amazing what discomfort youngsters, little girls, themselves already utterly wretched, can inflict on their peers! One day I was literally stoned – the word is not too strong - by a hail of rotten lettuces, which we were supposed to be sorting, a veritable dustcart of them, destined to be part of our next meal. I found myself buried under a mass of filth and garbage. Happily not a pile of stones, but the intention was clear enough and my memory of it likewise. But I bear ill-will to nobody and certainly not to the Sisters. They taught me to put up with it all and to remain silent, a precious lesson which has served me well all my life. Since God forbids lies, the Sisters notified the authorities of my existence at the time of a police inquiry. Fortunately, however, they also, just in the nick of time, warned the person who had hidden me among them, and hence they saved my life. Then came Saint-Mélany, it was a “dream come true”! A ray of sunlight in my childhood after years of fear. The kindness and warmth of the people and my parents near to me at last! I learnt to spin wool from the elders of the village, and I even knitted socks and gloves, which they had also taught me how to do. The schoolmaster, always in his grey smock, and his wife shared the teaching of both the little ones and the bigger children, and watched over us as if they were our parents. I remember all that as a moment of real happiness and even the job of fetching water from the village spring is still a happy memory. The very simplicity of our life has left me with a taste for natural things, for simple things and for physical effort, and with a love of the plants and animals that were so closed to us. I hope I have not changed too much. I’ve learned to throw nothing away, not so much as a crust of bread, because, after all, I was pretty hungry at time during those war years, and later on too, for other reasons. At Saint-Mélany, my father made clothes for the village people out of sheets and blankets. Another of the villagers made sandals out of old tyres. How impatiently we used to wait for those old tyres! They were in short supply and everyone needed them! A mountain-dweller had one or two cows, which was not common in the district. They were said to be tubercular, so he always had milk. But that was on the other side of the mountain, so you had to go down, then climb up the other side two hours there and two hours back. That was my Thursday outing. I had once been shown the way, and I was very proud of myself and happy every Thursday to fetch our litre of milk. The effort did me no harm, on the contrary, the exercise did me a lot of good. There you have a few brief stories of our life at Saint-Mélany and of the wandering that preceded it. Finally, I recall very vividly the concern shown to us by the inhabitants of this little village, who put themselves at our disposal, bringing us material aid and the food necessary for our survival, whereas we had arrived at Saint-Mélany with two trunks of personal belongings and a sewing machine… even on the memory of a child of 12, there are things that remain engraved forever. For the rest I can only confirm what my brother has written and no further testimony could make it more complete or more accurate. You will certainly appreciate that I cannot but support my nephew in the steps he has taken to have inscribed among the Justes parmi les Nations, if not the whole village, at least the two persons named above, without whom, no doubt, neither my family not I would today be in a position to offer our testimony. As I reside in the Paris region, I remain at your disposal to meet you at any time at your convenience and to answer any further questions that you may consider relevant. Thanking you for the attentive hearing you will give to the present communication, I am. Yours sincerely and respectfully, Mireille Vincent CC/- Marc Draer