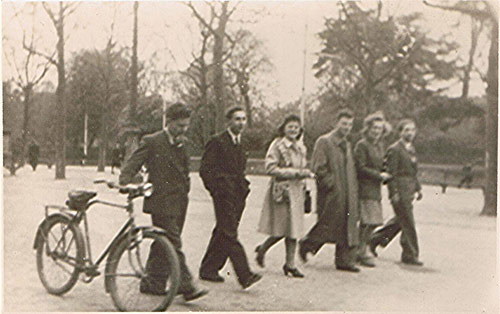 A few days after the armistice of 1940, a lorry carrying archives picked me up along the way and put me down at a town in the south of the country. (2) As soon as I got my bearings and found work, I thought contacts to get something done. First of there were high school students of good families who spoke of De Gaulle. Good. We used to go to the municipal theatre on the evenings of Petainist meetings. From the ‘gods’ we would let go tracts and stink-bombs. But no, we needed something a bit more serious. Arthur K. arranged a meeting for me with a girl underneath the clock on E. square at 12h35. She was Françoise A. of the Communist Youth movement. We met three times walking for an hour each time. She put questions to me. What I thought I might do! She explained what her movement was, what it was aiming at.
Should I necessarily join?
Not at all, if you want to work alongside us, we’ll have you!
Agreed!
She introduced me to Petit-Marcel, who in turn introduced me to Pierre G. The three of us formed a group, not a cell, just a group of three. Cells were for party members. I was not to know anyone else. I was not to possess any address book or keep any correspondence, no photos of friends or acquaintances. In case of arrest, I was to deny, to deny, DENY even the obvious. Orders stopped there. I repeat that I was never asked to join the party. I just wanted to work, and was completely on their side.
All three of us, my group, used to meet in square, on the banks of the river, but never in a café, that was forbidden! We used to bring our chess set. Pierre and I were deeply absorbed in it, while Petit-Marcel made comments on the game, that is, made his political statement. He was the head of our group. There was an examination of the French and international military situation and orders concerning the party’s struggle against the occupying force. I never heard of a request for the republication of l’Humanité in the occupied zone, nor of a speech by François Billoux at Léon Blum’s trial. As for party executives, I knew only the names of those who broke stones for the Transsaharanin the Sahara where the Vichy government had deported them. 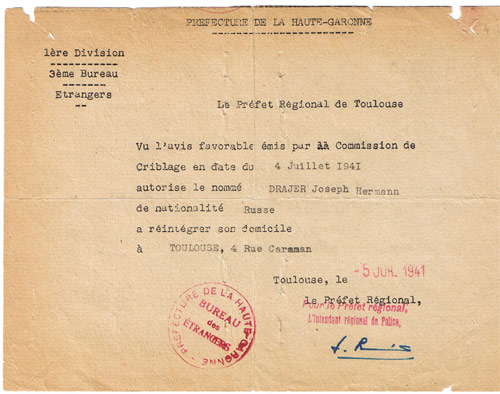 From time to time, each one of us, as an act of privation, would bring a sausage, a piece of gingerbread or chocolate… we tied up a parcel which was sent to the Transsaharan. From that time and at every meeting the armed struggle against the occupier was brought up. After the political summary, Petit-Marcel gave instructions for the week’s work: dropping of tracts in letter-boxes. Sometimes we were only given a single copy and we had somehow to come up with a few hundred copies. Then there were stickers and mural inscriptions. There were also some amusing moments. Vichy, in order to add to their repression, had recruited some young inexperience police officers, who patrolled in pairs and in plain clothes. But they had been favoured with heavy hob-nailed army boots and, in the silence of the night, you could hear them coming from 500 meters away! One evening, a woman who had seen me sleep a tract into her letterbox started shouting from her window: “thief, thief, after him!” Never, on an athletics track and lightly clad, did I ever run a one hundred meters as fast as I did then! Another job required bicycles. Each had his one. The first tore out in front to make sure the coast was clear. The second came up behind with cobblestone in his haversack and, as he sped past, through it at the ‘Francisque’, i.e. the Vichy emblem on the glass front of the committee room. Both pedalled of like crazy in the opposite direction! We had always arranged to meet in another part of the town, an hour later, to make sure we were all right, as we did after every separately executed sally. Just a handshake. Pierre and I retired each to his respective lodgings. Petit-Marcel went off to make his report to a fourth person whom I never met. We observed the same ritual after each job. This was all a good deal, more serious than the stink-bombs! I only ever carried out small jobs; but since I was also given the task of collecting funds from any private citizens considered to be anti-Petainist, I got to be known to too many people in so small a provincial town. In a short time I’d be sure to get nabbed, as they say, and Petit-Marcel agreed that I should have a change of air and leave the town. And that, Mr. Henry-Lévy, was before the Nazi war-front against the Russians. I never again saw Petit-Marcel and his eternal smile, nor Pierre G. with that sombre look of his. They paid with their lives. And out of how many similar groups of three was there to be only one survivor? Well then, you must understand how painful it is to hear so much quibbling over dates, over the position adopted by this one or that… (2) Toulouse